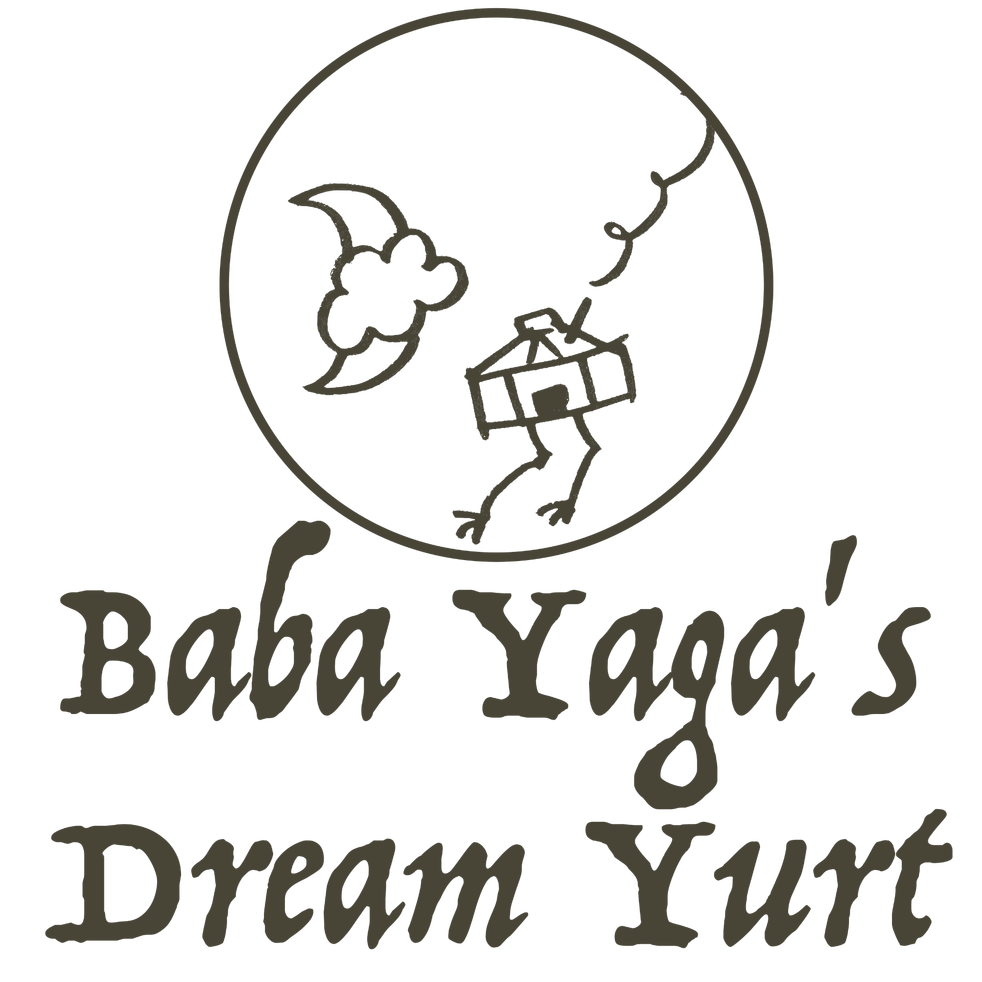 Explore the world of the subconscious mind in Baba Yaga's Dream Yurt. Each participant will be invited to visit a resonant moment of their own, after which they will be gifted with a creative response by the Yurt dwellers. This is an individual, gifted experience. Come, and experience a moment in the midst.

“Go through the woods till you find the Yaga's hut, and ask her to give you her fire…”

"I headed to the @thepleasuregarden_perth for an interactive experience at @babayagasdreamyurt. I'd read about the structure of the experience, but being there took me by surprise. You enter a tent (shoes off!), dimly lit, furnished with rugs and cushions, and are greeted warmly by your hosts who invite you to share an experience that resonated with you. They absorb what you share, and then while you sit and listen to the ambient music, each of them reflects back at you a piece shaped by what you've revealed.
Lyrics composed just for you at that moment, art crafted in response to what you've said while you sit, and poetry brought to life all inside the yurt.
I was very moved and enchanted, and wish the yurt was doing a longer run at Fringe just so that more people could experience it."

Annnnnnndddddd that’s a wrap on #babayagasdreamyurt. A thousand fragmented words that have burst into the drifting air like shattered confetti; now trod underneath the festival’s feet but the beat, but the beat of my heart lights on the wing of a dove - released. Thank you to all you Yurt Goers for your honesty, insight and for taking a risk to share a moment with strangers 🙏🏻

What a beautiful moment I passed in this tent:) Totally recommend!

Intersubjectivity is the Context

Here I want to slow things down and explore in some detail the idea of
intersubjectivity, of the process of engaging with another or others in shared spaces of interaction. I have touched on the idea that human existence is inescapably tied to its being in a state of inter-relationship with the things of the world. That is we as individuals do not exist in, nor are we formed in, isolation. Rather, we are all connected and that connection both forms and
defines us. We are inescapably in intersubjective relationship with the
things of the world, where intersubjectivity has to do with being and knowing relationally. I will now take a closer look at this idea. I do this in order to clarify and underline a key assumption of my position, that we are
intersubjectively, not subjectively, formed.

Stolorow traces a shift from the idea of the mind as an object standing
separate and alone amongst other objects in the world. He points to a
conceptual shift from the Cartesian doctrine of the isolated mind that
Freud inherited from Descartes (Stolorow, 2000, p. 149). In this view the mind is conceived as "'a thinking thing' that has an inside with contents and looks out on an external world from which it is radically estranged."
(2000, p. 149). In this conceptualisation then, not only does the mind exist in isolation, but it is also ‗radically estranged‘ from the world in which it exists. There seems here little place for quality interaction; the only possibility seems to be that of thinking about what is other. In contrast, I believe a quality interaction involves a more embodied responding in which we talk with, act with, feel with, and create with each other. Crossley traces the development of the concept of intersubjectivity and
starts with a discussion of Husserl, who in his Cartesian Meditations
challenges Descartes‘ idea of the isolated mind (Crossley, 1996, pp 1–7). For Husserl what is central is "the question of the existence of other
consciousnesses and his relationship to them" (1996, p. 3). In this way he does not doubt or reject the existence of that which is other to self, rather he affirms that we are always in relationship with that which is other to self.
In the words of Husserl:

Thus, for Husserl intersubjectivity confirms and in a sense forms the
objective world, that which is other than self. Crossley goes on to say,

"other perspectives on the world than my own are necessary if the
objectivity of the world is to be established. Objectivity, in this sense, is intersubjective. It is a view of the world arrived at through mutual confirmation and negotiation between different and independent
perspectives." (Crossley, 1996, p. 3)

We exist in the world with others and understand that world through
processes of negotiation with and confirmation by others. Buber similarly posits that

"our belief in the reality of the external world comes from our relation to other selves. … The I is not an I, the self not a self, except through its meeting with the thou" (Friedman, 2002, p. 193). These writers all hold that it is precisely because we are each different, because we each hold differing perspectives that are individual and independent of each other, that any shared and co-created concept of 'world' is possible.

If we stay with this idea and extend it a bit it is possible to say that the
boundaries between self and other now hold a new potential for interaction. Stern speaks of a greater permeability of the boundaries between self and other where "what is ours and what belongs to others begins to break down. Our intentions are modified or born in a shifting dialogue with the felt
intentions of others" (Stern, 2004, p. 77). Here again is this idea of a
dialogue, of a shifting and fluid dialogue with the felt intentions of others.
This speaks to a connectivity and interaction that is at a deeper or different level than spoken dialogue; it is at a level of feeling and sensing, and thinking. As Stolorow points out this dialogue takes place at the interface of
experiential worlds. He speaks specifically from a therapeutic context when
he says psychoanalytic therapy "is no longer an archaeological excavation of ever deeper layers of an isolated unconscious mind. Instead, it is a dialogic exploration of a patient‘s experiential world." (Stolorow, 2000, p. 150). As the companion talks to the companionee their experiential worlds interact. What emerges from this interaction is necessarily a co-creation; it is born of both the companion and the companionee. I believe this idea of a dialogic exploration of experiential worlds is applicable beyond therapy in any context.

Intersubjectivity, then, has to do with what is of me, what is of you, and
what is co-created by us. Stern speaks of an intersubjective matrix, which I understand to be a relational space or context for our interactions. He says it is the "overriding crucible in which interacting minds take on their current form." (Stern, 2004, p. 78). So there is something here about a place in which creation, or co-creation takes place. He goes on to say that "Two minds create intersubjectivity. But equally, intersubjectivity shapes the two
minds." (2004, p. 78). This for me is very important as it points to the idea
that we each form or co-create our interactions and are in turn formed or
co-created by them. As previously stated, "we can recognise that selfhood is inevitably intersubjective. Self is seen to be achieved only in relation to other." (Crossley, 1996, p. 68). We are thus intersubjectively formed in interaction with others/the world. This forming takes place in a relational space, an intersubjective space. This is a key assumption that I hold.